STEP_UP Multiplier Event in the Netherlands 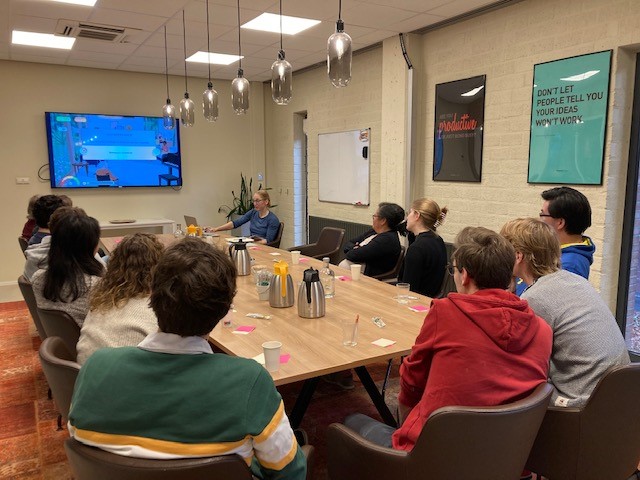 AFEdemy, partner in the Erasmus+ project STEP_UP | Stop epidemic growth through learning, organised a Multiplier Event on 11 January 2023. 12 participants took part in the event, including 5 board members of student association A.S.L.V. Quintus from Leiden, students from the study association Leidsche Flesch and 2 invited guests.

The plenary session was given by Bart, with Dieuwertje and Sandra helping out. After Bart’s welcome speech, the STEP_UP Video was shown and then it was explained what we expected participants to do. The online game was shown and tested while discussing. Based on tips and tops the participants wrote on post-it, the game was evaluated.

Workshop participants were very positive about the game’s graphics. They especially liked the animations, illustrations and colouring. They also liked the choice of characters and the fact that you could play the game from different people’s perspectives. Participants named several areas for improvement such as short texts, improvements in translations and in how to motivate participants to play the whole game. Finally, the game was considered a good combination of playful and informative, and participants enjoyed the interlude of mini-games.

At the end of the Event, we discussed the Handbook, the Toolkit for Professionals and the training methodology with the participants.

This website uses cookies to improve your experience while you navigate through the website. Out of these, the cookies that are categorized as necessary are stored on your browser as they are essential for the working of basic functionalities of the website. We also use third-party cookies that help us analyze and understand how you use this website. These cookies will be stored in your browser only with your consent. You also have the option to opt-out of these cookies. But opting out of some of these cookies may affect your browsing experience.
Necessary Always Enabled
Necessary cookies are absolutely essential for the website to function properly. These cookies ensure basic functionalities and security features of the website, anonymously.
Functional
Functional cookies help to perform certain functionalities like sharing the content of the website on social media platforms, collect feedbacks, and other third-party features.
Performance
Performance cookies are used to understand and analyze the key performance indexes of the website which helps in delivering a better user experience for the visitors.
Analytics
Analytical cookies are used to understand how visitors interact with the website. These cookies help provide information on metrics the number of visitors, bounce rate, traffic source, etc.
Advertisement
Advertisement cookies are used to provide visitors with relevant ads and marketing campaigns. These cookies track visitors across websites and collect information to provide customized ads.
Others
Other uncategorized cookies are those that are being analyzed and have not been classified into a category as yet.
SAVE & ACCEPT

AFEdemy, Academy on Age-Friendly Environments in Europe B. V.