The SHAFE Stakeholders Network is happy to release its Position Paper, developed in collaboration between SHAFE partners and the participants on the COST Action Net4AgeFriendly, to present recommendations that aim to promote healthier environments for all citizens and make environments accessible, sustainable and reachable for all, with the support of ICT.

Thanks to all for the great collaborative work!

A new concept was created since 2017, based on the desire to implement Smart Healthy Age-Friendly Environments (SHAFE) across Europe, fostering happier and healthier people in all communities.

This idea took shape and became a solid movement. That is how SHAFE was born and further launched in 2018, by Cáritas Diocesana de Coimbra and AFEdemy, in close cooperation with several European organisations.

SHAFE began as a Thematic Network, approved by the European Commission, with the ambition to draw policy makers, organisations and citizens’ attention to the need of better alignment between health, social care, built environments and ICT, both in policy and funding. The conclusions of this extensive work in 2018, gathering over 160 organisations as partners, was delivered to the European Commission and Member States in a Joint Statement and a Framing Paper in December 2018.

After this, SHAFE evolved to a European Stakeholders Network, which is currently working to achieve better COOPERATION and IMPLEMENTATION, as the major challenges for this next period. This is the main aim of the Position Paper released today.

Here, we present recommendations that aim to promote healthier environments for all citizens and make environments accessible, sustainable and reachable for all, with the support of ICT.

The pandemic has uncovered the major opportunities and benefits of turning digital. However, single digital solutions are not the panacea to all the societal challenges.

Citizens across different age groups also need personal human contact; they need to meet, to talk to each other, to hug and to love. Digitalization cannot replace this human need but can be a powerful vehicle to support people. The scenario during 2020 is an opportunity for the digital revolution to be well thought and implemented, if all the adequate challenges are well considered and tackled.

The Smart Healthy Age-Friendly Environments Network will thus focus on the narrative, debate, disclosure and knowledge translation of smart digital solutions and of solutions to optimize the physical and social environments of individuals in a concerted manner, bringing together also the domains of health and social care.

The position paper will also provide indicators to measure progress and success on the realization of SHAFE.

The full document is available here: 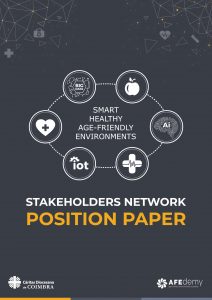 AFEdemy co-developer of The Age-Friendly Cities and Communities Questionnaire